Audio and SET welcome Toolroom records standout, Weiss, to the club for an Open-to-close set on January 17th.

What makes Weiss stand out as a DJ/producer? It's the fact he embodies the spirit and simplicity of that original House sound. With a love of old school jackin', Chicago House - combined with a modern approach to his productions and sets – as an artist he has a unique and individual style that's won plaudits from across the scene.

After a spectacularly successful intro to the scene in 2013 which saw Weiss being championed by the likes of Groove Armada, Green Velvet, Loco Dice, Kenny Dope, Pete Tong & more, the hit single ‘My Sister’ rotating on BBC Radio 1 whilst staying strong in the Beatport top ten chart for over four months, and countless gigs all over Europe, it was plain to see that Weiss was here to stay. Following this lead, Weiss has risen to even greater heights, with his releases inspiring support from the most respected & freshest names in the industry, including Gorgon City, Eats Everything, Shadow Child, Hot Since 82, Claude Vonstroke, Green Velvet, Annie Mac and more.

Reading through his discography is like an accolade to underground club hits, with original productions like ‘Guitar Man’ ‘Man Gone’ ‘Our Love’ & ‘I Believe’ delivering that classic Weiss production, ranging from defining vocals to that unmistakable rumble and old school drums of the driving club cuts. More recently his summer anthem “You’re Sunshine” ignited both the clubs and radio becoming one of the most recognized tracks of 2016 with countless Radio 1 plays whilst becoming one of the “most played” tracks of the summer on Sirius FM, one of the biggest stations in the U.S. Similarly Weiss has seen Huge demand for remixes, including MK, Rudimental, Gorgon City, Green Velvet, Tube & Berger & more all looking for that distinctive Weiss sound. Most recently he has seen success on labels such as Dirtybird, Relief, Play It Down and Toolroom, with every release racing up Beatport’s charts whilst gaining widespread support from his peers and across global radio waves.

Over the past 12 months Weiss has showed no signs of slowing down, culminating with a DJ Mag Best Of British nomination and the world-renowned BBC Radio 1 inviting him on to Pete Tongs Essential Selection for the ‘Afterhours Mix’ where he was able to showcase his darker side with a suitably driving mix ranging from 6am heavyweights across to forgotten 90’s classics.

A huge venture for Weiss see’s him taking his very own night into the clubs; ‘Weiss City’ showcases this talented producer's ability to transcend the full spectrum of house music – and give his fans a true insight into his musical talents. An opportunity to invite fellow producer/DJs who Weiss truly admires, these night’s also feature special guests who will bring their own signature styles that are true to that original house sound.

Following two stand out performances at the Egg in 2015, it made only natural sense for Weiss to be launching his own London residency at the club with the first ‘Weiss City’ taking place at the beginning of 2016 to a sell out crowd. Regular packed out events followed with special guests including Oliver Dollar, Ninetoes, Dennis Cruz, S-Man, Riva Starr, Mat.Joe & more, finishing off the year with a stand out event at ADE Amsterdam with Tube & Berger at the Legendary Panama club. Trends in dance music will always come and go, Weiss is an ambassador for real House music, championing the original Jackin’ Chicago house sound, and with a string of exciting projects, collaborations and hotly tipped releases on their way, expect nothing but the hottest and most underground cuts from this rising star… 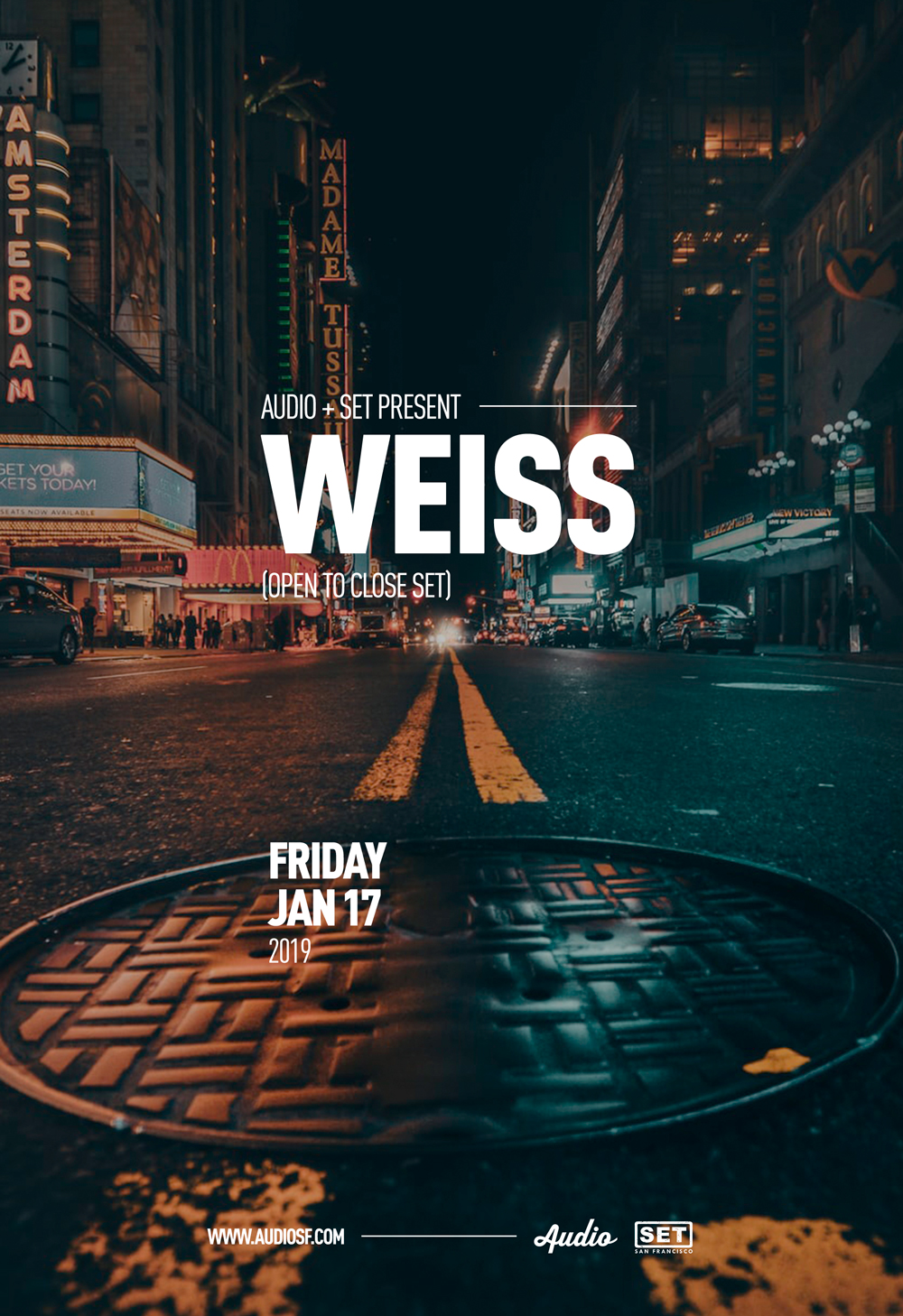