It's 4 times the fun on April 18th when good friends Tropicool, Kedd Cook, Bones, and a very special guest take over Audio for a night of music that will have you dancing dirty...

-TROPICOOL-
Tropicool is a feeling, not a sound. Served frothy and blended with a cocktail umbrella, guaranteed to give your girlfriend frosty nips and a tingle in her thighs. Flavours tease the pallet tangoing in musical bliss with the accompaniment of Steel Drums, Saxophone, Key-tar, and a funky baseline. The genre of sound has been self described as "sun-kissed tropical funky disco" and we must oblige. The man behind the tropical shirt and funky feel good is David La Melza; Santa Barbara native, and good times engineer. He happens to be a founder of both GottaDanceDirty.com and Mindtai.com. Mind the forecast, and make sure you're front and center for the Tropicool Funder!

-KEDD COOK-
There are plenty of DJs who are masters at giving people exactly what they want. After all, it's kind of their job. In tiny barroom dance floors with dim light and swanky ambiance, Kedd Cook hopes to give the crowd a little bit of what they need. That means introducing a diehard dance crowd to established headliners such as Tim Green, Lee Foss, Aeroplane, Maxxi Soundsystem, and Jesse Rose, to name a few for which he's been in direct support of. These are the types of acts that most small clubs and indie promoters would kill for, not only for their notoriety, but for their musical influence. Kedd Cook, born Ian Alexander, knows that choosing quality, intellectually adept dance music only makes him and his weekly residences more distinctive. Working with tastemakers who play both digital & vinyl rare tracks, everything from old funk soul to deep house, and techno Ian has learned the ability to peg artists who can throw down rare and different forms of electronic music you don't normally hear at big clubs. Kedd likes to keep a fun, upbeat dance vibe while simultaneously pushing the envelope with music that's different from the norm.

-BONES-
here's a reason Trevor Moffitt, aka BONES, has played with many of the top names in electronic music from around the world. Fusing house, garage, deep, ghetto, and techno - BONES brings the dirtiest noise of electronic music today into his DJ sets. His unique and eclectic styles have landed him performances at EDC Vegas, EDC New York, EDC Chicago, HARD Summer, HOLY SHIP, Beyond Wonderland, Snowball/Snowglobe festivals, Coachella parties, and showcases @ SXSW and WMC.

In part to co-owning and managing one of the most popular electronic music outlets in the world Gotta Dance Dirty, he also serves as resident for Dim Mak Records and Insomniac's INCEPTION Saturdays @ Exchange LA. 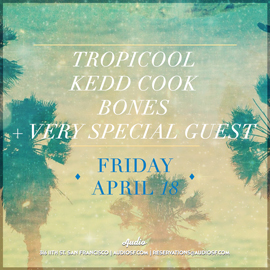