Thursday, May 23
Sam Binga + Egoless + Mat The Alien
Soundpieces is pleased to present our third installment at the renowned AUDIO NIGHTCLUB, equipped with San Francisco’s most elite custom and hyper-loaded Funktion-one Sound System. Follow our path to experience supreme sonic ascension with a critically stacked line-up of world-class bass heavyweights....

Something's happening to the faster side of dance music. Maybe it's the hyperactive influence of juke's chopped-up 808s, the embrace of dubstep's half-time flow at a higher tempo or perhaps it's simply the ongoing evolution of the mutation started by dBridge and the Autonomic podcasts. Whatever the origin, that spectrum of music between 160 and 170bpm is sounding utterly vital once again.
Sam Binga has placed himself firmly at the centre of this new wave, with releases on some of dance music's most respected underground labels - 50 Weapons, Exit and Critical. His sound spans the anthemic rowdiness of tracks like 'AYO' and 'Lef Dem', to the deeper explorations of his collaborations with Om Unit, and has attracted the attention of artists such as Zed Bias and CHVRCHES - who have both hit him up for remix work - and Kode9, who featured his tune '11th' with Addison Groove on his critically acclaimed Rinse CD.

In the relatively short period of time since emerging onto the scene, Sam Binga has played clubs and festivals across the world, including regular turns at the world-famous Fabric in London, Outlook in Croatia, and a recent headline tour of Australia and New Zealand. As a DJ, he has become known for his fearless style, blending juke and jungle with classic crunk and dancehall. His unreleased dubs, like the 'Sambaata' refix, or the 'Crackney Parrot' rebax, are still in huge demand from DJs such as Friction, Machinedrum and Alix Perez, while his recent EP with Fracture and Rider Shafique (of Young Echo fame) got love from forward-thinking cross-genre selectors such as Toddla T, The Heatwave, Murlo and Breakage. Having kicked off 2015 with two instantly sold out releases - the 'Nuh Chat EP' on Critical, and the self-released 'TransAtlantic EP' with Om Unit - something even bigger and weightier is currently under constructionة And without giving too much away, rest assured that it sounds like nothing else out there.

If you're fully in the know, or if you pay attention to wider movements in the music world, you'll realise that there's some serious weight behind the Sam Binga name, with countless gigs and worldwide tours covering pretty much the whole spectrum of underground dance music under his belt. But that's not important right now: what's important is that mix of dirty-south swagger, Chi-town footwork and UK pressure people like Sam Binga are bringing to the table. Fresh, weird and strictly fire on the dance floor.

Ognjen Zecevic aka. Egoless was born in 1984 in Croatia (ex-Yugoslavia) when (after Tito's death) the country was slowly preparing for a bloodshed which cumulated in the beginning of the 90-ies, exposing the worst in human beings. From and early age music was an escape from harsh reality that was surrounding him, and very soon, after discovering punk & rock he started his first band, and did his first gigs from an age of 14.

After moving to the capital (Zagreb, where he resides to this day) he instantly got hooked to dub, reggae and jungle music and shortly after that in 2002. started getting into music production, producing dub, reggae, jungle and some experimental music while still playing and touring with various bands. In 2009. he started Egoless project with garage influenced No, Ego, No Problems EP, but quickly started combining dub and dubstep music into one organic whole, while keeping the both foundations of styles in tact, utilising old Jamaican dub techniques and hardware (analog mixer, tape, tape echoes, spring reverbs, instruments). In the same spirit he is doing the performances live using the same techniques of music deconstruction and improvisation on the spot.

After 2012. and first vinyl release and initial recognition, he never looked back and dedicated himself solely to the project and after countless successful vinyl & digital releases and remixes for highly respected labels in the scene such� as System, Scrub a Dub, ZamZam, Lion Charge, Blacklist and gigs, festivals and tours all around UK, Europe, Australia & New Zealand, Canada, Russia and India. He currently releases music on influential DEEP MEDi MUSIK for which in 2018. he released highly anticipated “Empire of Dirt” release and continues to play gigs all around the world.

Since the age of 14 Mat has been mixing, scratching and making music. He is a musician who has literally done it all and has been a house hold name in the music industry since rave went mainstream. Over the years he has been featured some of the worlds most renowned music festivals along with the most ground breaking and influential music blogs, charts, mixes & radios shows.

Described by Knowledge Magazine as 'awe-inspiring' & 'some next level shit,' Mat has toured across the globe from Miami to Moscow and played sports events such as the US Supercross (Las Vegas), the Olympic Winter Games (Torino & Whistler), X Games (Aspen)

Over the past 20+ years his sets have become renowned for mixing many genres/tempos seamlessly and he is able to adapt to different types of crowds, which he proved when he won the first ever Red Bull 3 Style event in Vancouver 2006.

His Original Music, Mixes & Remixes (Official & Unofficial) are in constant supply & have been featured on many TV shows, DVDs, Video Games & Webisodes.

Growing up around music from an early age lead to Mat taking up the drums at age 10 and playing in a local band with his brother. In 1988, at age 14, Mat stumbled upon the underground Acid House scene and DJ movement taking over the abandoned UK warehouses. From that point on he searched out where this music was from and began learning how it was put together on the 2 Technics turntables.

Muze records became the store where local djs/producers came to get the new underground sounds and tickets to local events. Mat began playing his first shows before he was old enough to get into the venues. He played sets on some of the Manchester area pirate radio shows, began doing club shows, & mixed charts on the Intallex radio show run by XTC and Marcus Intallex. Scratching was the next thing he became hooked on after seeing Mark XTC and hearing a tape from Dj Hype on Fantasy FM.

In 1995 Mat and his family decided to move to Whistler Canada to pursue a new love of snowboarding. In Whistler, BC he met like-minded DJs like Vinyl Ritchie & Kilo Cee who were playing diverse sets dropping Hip Hop into Funk into electronic music to crowds from all over the world. (These 2 DJ's also gave Mat the name the Alien). Mat enjoyed doing sets where he could flip from genre to genre, making live mash ups & jamming on 4 turntables with other DJ's.

Really Good Recordings Mats Record Label continues to support underground Canadian Bass Music from upcoming and established artists and has releases set to go for 2017. 2016 saw support via plays and feedback from some of the biggest names like J Kenzo, Om Unit, Sinistarr, The Librarian with multiple plays on Rinse FM London

As resident of Basscoast Festival, he has played over 13 years in a row. His radio show with Librarian — www.sub.fm is hosted bi-weekly and features the latest music from their crates via the longest running pirate internet radio from London UK.

This event was made possible by SOUNDPIECES

█ SOUNDPIECES — For over 13 years, Soundpieces has been a consistent staple of diverse and forward thinking electronic music in San Francisco and across the globe. Responsible for countless Bay Area debuts such as Skepta, Shlohmo, Mount Kimbie, Hudson Mohawke, and Nicola Cruz, Soundpieces has become a powerful ambassador of international music in California. But our work doesn't stop in the Bay Area, we have helped book festivals such as Symbiosis Gathering, and produced one-offs in New York, Detroit, SXSW Austin, Outlook Croatia, throughout Asia, and beyond. Valuing quality over any specific genre or style, Soundpieces continues to be the quality plug for fresh, exciting musical styles showcased in the most sophisticated and underground atmospheres. With our rotating roster of new talent and heavyweight artists, along with the longest running bass music weekly in San Francisco, we have built a legacy as one of the West Coast’s greatest resources to experience underground electronic music. 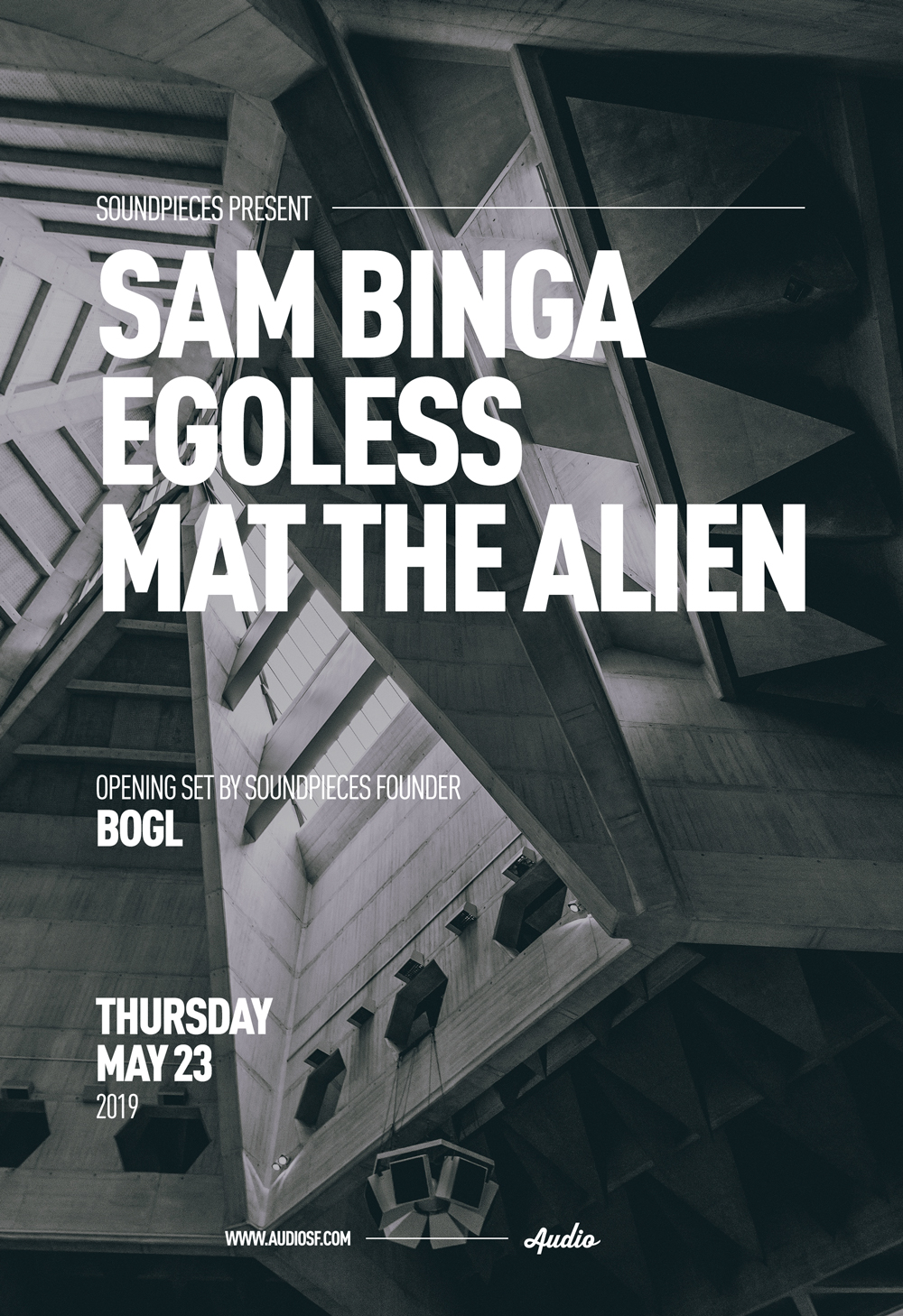