Edu's blend of electronica, house and indie has seen him release original music on institutions such as Bedrock and Get Physical, as well as newer pretenders Culprit and Suara over 2012 and 2013.

It was during the years 2008 and 2009 though, when Edu exploded onto the international electronic music landscape. Firstly, "El Baile Alema" on Liebe Detail, produced with his friend Coyu was appointed "Best Underground Track of the Year" by Beatport. Secondly, his label Elektisch was born. Over the past 5 years, Edu has curated original music and remixes from the likes of Pleasurekraft, Blond:ish, Hot Since 82, Solomun and David August for the imprint, as well as close friends and newer talents Los Soruba, Sivesgaard and Dosem.

As a remixer, Edu comes into this own. His anthemic remix of The XX's "Crystalised", from their stratospheric "xx" album, proved to be Young Turks best selling remix to date. Follow up remixes of Maya Jane Coles' "You" for Hypercolour and X-Press 2's monster "Lazy" cemented him as a top tier remixer and sustained DJ support from the likes of John Digweed, Jamie Jones, Sasha, further cements his ascendancy towards the upper echelons. From the lounge bars of Lebanon, forests of Brazil and the magic of Goa, all the way to the Miami bayfront for Ultra Music Festival, the open air madness of the Kings Day street party, Amsterdam, and the hallowed terrace of Space Ibiza, as resident; Edu's truly global touring schedule continues to broaden.

The tastemaker clubs of Watergate, Berlin, Warung Beach Club & D-Edge, Brazil and fabric, London, have all laid host to Edu's DJ talents, while his "Fayer" brand has taken root in his home town of Valencia and is set for sustained international exposure in 2014.

What does the future hold? Not content with having played 5 continents of the world in 2013, touring will take Edu from Montevideo, Lima and Sao Paulo, to Sydney, Bali and Cape Town, via his European strongholds of Berlin, London and Amsterdam. A debut artist album, live show and touring club brand are just some of things on the 2014 checklist for one of the most talented, hard working and gregarious artists in today's electronic music scene.

Opening sets my PEDRO ARBULU and MFYRS of Modular 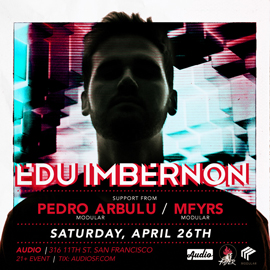