Friday, November 26
DOSEM
Audio favorite, Dosem, returns to the club on November 26th. The Spanish born, Anjunadeep standout always delivers a mix of heart pounding and euphoric music. This will sell out.

Revered for a desire and passion to explore the deeper shades of house and techno, Dosem’s career as an artist has been on a constant upward trajectory. Fusing together over a decade of mastering his craft in the studio, along with an unmatched touring pedigree across some of the world’s leading clubbing brands, his fusion of deep textured sounds and driving percussion grooves have driven him to become one of the most influential Spanish artists in the scene.

Honing his craft since 2008 with a string of releases on imprints such as Christian Smith’s Tronic, Hernan Cattaneo’s Sudbeat, Slam’s Soma Records and John Digweed’s seminal Bedrock, Dosem’s journey through the underground landscape has been catapulted by a thirst for delivering forward thinking groove materials of the highest caliber. With his debut album ‘Parallel’ on Sino bursting him onto the scene showcasing his rich fusion of atmospheric Techno, his musical pallet has gone from strength to strength, with following albums ‘Origin’ on Tronic and Vicious Magazine’s ‘Album Of The Year’ ‘City Cuts’ on Suara unveiling his diverse approach to building expertly designed dancefloor cuts, while also leading to the coveted spot as one of Beatport’s Top 5 techno artists in 2014.

With a versatile sound which is as dynamic as it is forward thinking and with stellar remix duties on Hot Since 82’s ‘Planes & Trains’, which reached #1 on Beatport’s Techno chart, to working his deep house magic on Umek & Mike Vale’s ‘All I Want’, which hit #1 in Beatport’s deep house chart, his ability to cross between different styles of house & techno has led him to work with some of the industries most respected talents.

As an artist whose talent for production is of world-class appeal, so too is his ability to hold down the top-tier dancefloors of the world’s best clubs and festivals. Little surprise then that Dosem’s tour schedule has escalated year on year. Highlights in 2015 such as his ‘City Cuts’ Worldwide album tour bolstered his international profile, alongside warming up for The Chemical Brothers at one of the finest events in the dance music calendar Sónar, on top of stellar performances at festivals like Ultra Miami, We Are FSTVL and Ultra Europe, as well as a and a 4 year residency at Ibiza’s Blue Marlin. Reaching new soundscapes worldwide with a strong touring presence with his Houstrike brand in Japan with parties at Womb (Tokyo), Osaka and Nagoya, as well as a continued presence across the US with shows through LA, Miami, New York, Chicago and Detroit, his relentless schedule has signaled his sound far and wide across the dance music calendar.

Delving deeper into 2015 with his remix of N.Y.’s Finest ‘Do You Feel Me’ which stormed straight to the top of the Beatport charts with a piano driven, tech house roller adding a fresh dynamic to the 90’s NY house classic, to 2016’s Beatport #1 remix of Mat Joe’s ‘Nighthawk’ melding together more deep grooves and synth work. Dosem’s recent output continues to reach further towards elite territory. That same year also saw Dosem introduce his original work ‘Projection’ on Toolroom Records, putting forward a jacking house groove and building on his refined and perfected ability to construct percussion built for dominating the dancefloor.

Reaching new highs in 2017, Dosem made his Boiler Room debut under the arches of the Archaeological Museum of Catalonia in his home town of Girona. On the road his diary was littered with high profiled shows that included Resistance Ibiza, Ultra Miami and Tomorrowland, whilst out of the studio he continued to put forward his sound in new, exciting directions. Delivering a selection of singles and remixes via imprints such as Houstrike, Octopus Records, Stereo Productions, Toolroom, Incorrect and Tronic, just to name a few.

Stepping into 2018 having spent the latter part of 2017 buried away in the studio, it’s fair to say that Dosem is armed and ready to bring a slew of creative output to the table. One of his immediate projects is the development of his Houstrike brand, which has become his multimedia lab for exploring deeper and darker sounds. Ever seeking musical versatility, Dosem plans to enrich Houstrike with a flourishing stream of new output. Further studio activity will see Dosem deliver a cluster of new music on a selection of labels that include Stereo Productions, Toolroom and Anjuna Deep. Whilst away from the studio his movements across the year and back on the road include a run of globetrotting adventures that will see Dosem headline parties in Europe, North and South America.

A turning point has occurred in recent years thanks to its releases on the renowned Anjunadeep label, which consolidated him as one of the Melodic Techno most demanded profiles in the international club and festival circuit. Releases such as 'All Locations', 'Stay True' and 'Extraction' occupy the first positions of the world charts alongside epic Remixes of '1998' by Binary Finary, 'Air For Life' by Above & Beyond & Andy Moor, 'Hyperlude 'By Yotto and 'Parfume 'by Eli & Fur, and epic performances at Anjunadeep Explorations and Open Air in London.

In 2020, Dosem presents his fourth studio album 'Dream Decoder', a considered mix of ambient atmospheres and melodic techno preceded by the singles ‘Tower’, ‘Megacities’ and ‘Eternal Summer’. With DJ support from the the likes of Tale Of Us, Hot Since 82, Maceo Plex, Camelphat, Gorgon City, Nora En Pure and Solomun and tastemaker stations like BBC Radio 1, Triple J, and KCRW, Dosem’s newest LP is set to solidify his reputation as one of Spain’s premier dance producers.

Having gained strong support from the undergrounds elite and many of its discerning fans, what lies ahead is truly a period of exciting potential. Fixed on exploring new facets as a music producer, Dosem is also ambitiously stretching his sound into new avenues. Pushing his musical boundaries on all fronts, the key to his passion lies within his eagerness to create soundscapes that possess a unique charm, whilst all the while being raw timeless electronic experiences. From the dark bass riddled sounds of underground techno to melodic house infused tech, the sound structure of Dosem’s musical palette is vast, which in turn complements his knowledge and familiarity of a genre and scene he has passionately dedicated his life to. 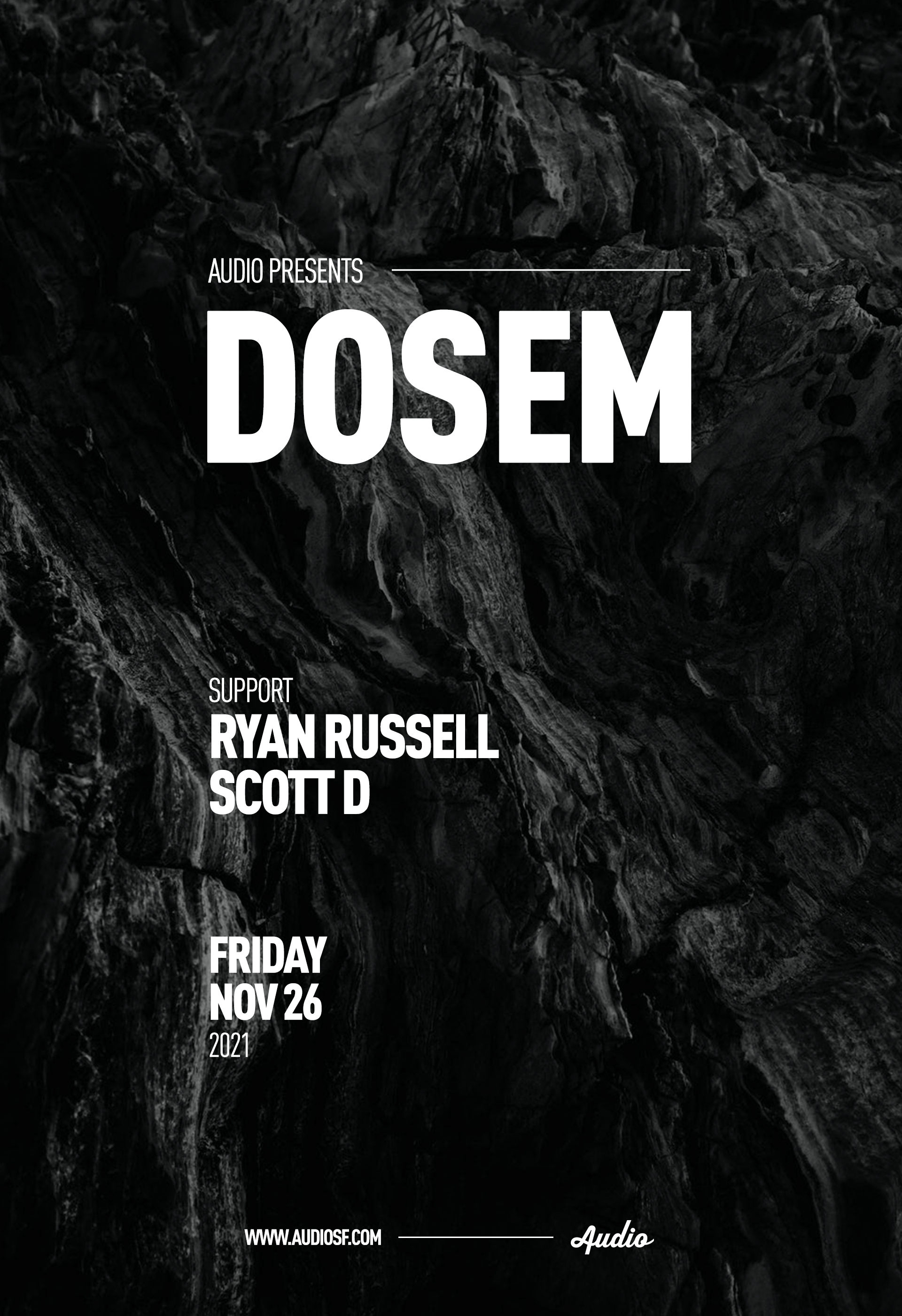