AUTOGRAF's music has been all over the cool kids airwaves these days and we're jacked to have him headline on June 28th. He's got some of the best music in the game so make sure to bring your dancing shoes, heels and sneaks!

Before the music, there was Future Soup. This was the first creation by Autograf, an eight-foot 500-pound sculpture. It's an obsession with the Future and the limitless possibilities it holds. What started out as a desire to "make art," turned into a curiosity to make music. This curiosity has set the Hype Machine charts ablaze with four #2 hits overall and two #1's for Autograf's remixes of Marvin Gaye, Stevie Wonder, French Horn Rebellion & Savoir Adore. In a short period of time, Autograf has gained critical acclaim in the blogosphere being named to Indie Shuffle's annual "Best Remixes" award along with numerous features on ThisSongIsSick, Thump/Vice, Dancing Astronaut, Gotta Dance Dirty and more. With BBC Radio 1 airtime, and over 1.5 million Soundcloud plays and growing, this new music project is here to stay.

With all the new found success for the music, Autograf hasn't lost sight of the desire to make art. "We have some new sculptures in the works, and are also developing a hybrid electronic live show. We're making our own midi-controllers and custom digital instruments. For our live shows, we want to create a unique experience for the audience that goes beyond the DJ booth. For our DJ sets, perhaps we'll install our sculptures to make a sort of dance party meets art installation. There's just so much we want to do."

With no shortage of ideas, where they go is as limitless as their vision for the "Future." One thing is for certain; Autograf is taking their "Future Soup" mantra to heart.

Joining Autograf is, DR. FRESCH. He's back for his third time at Audio but this time his arsenal packs a heavier punch. This smooth operator has been blowing up lately and when you have support from the likes of GDD, Indie Shuffle and Billboard Next Big Sound there's no stopping him. 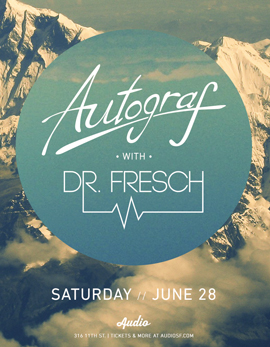